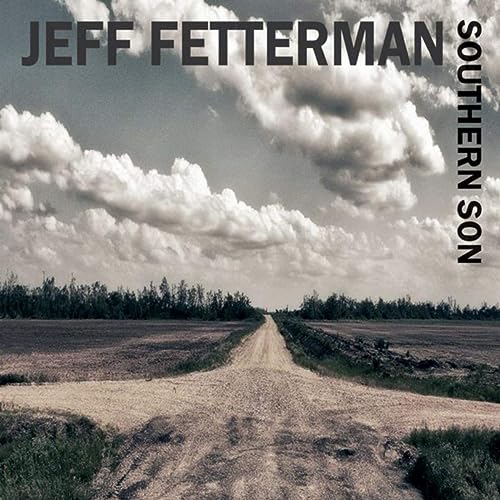 Ah the life of a CD reviewer. We spend inordinate amounts of time on search engines or emailing contacts in an effort to keep current with the always growing list of talented blues and blues/rock artists from literally every corner of the world. Just when I think I have this down to some twisted art form, I receive a CD from someone I have never heard before and I wonder “how did I miss this guy/gal?”. The other day I received a copy of “Southern Son”, the fourth release from the Pennsylvania based Jeff Fetterman Band. I had a few others in to review ahead of it so I let it set a couple of days. When the time came for “Southern Son” to hit the CD changer, what happened next went something like this:  4 seconds into the opening track I heard an evil B-3. 8 seconds into the opening track I heard a great horn section. At 1:03 of the opening track, I heard a very clever and perfectly executed timing change. When the opening track ended at 4:26 I was among Jeff Fetterman’s biggest fans.

“Southern Son” has so many positive attributes I am certain I am going to do the recording an injustice by being unable to list them all in this review. First and foremost, Jeff Fetterman is a very accomplished guitarist who seems perfectly at home both physically attacking the strings of his guitar as well as gently strumming her into submission. Fetterman is also a very enjoyable vocalist, gruff on the edgier tunes, mellow and gentle on the ballads, always flexible enough to match voice with style. In that particular way his vocals may remind you of someone like Huey Lewis or Bob Seger though he does not sound like either. But, like Lewis and Seger he uses his voice in different ways to match the music. In addition he is a very clever and accomplished lyricist. “Southern Son” is well engineered and Fetterman’s band ideal for his types of music. Ralph Reitinger III on bass and John McGuire on drums really cover a lot of ground in these songs and are among the better rhythm sections I have heard, I was very impressed by these guys. This is a bucket list band for sure, I would love to hear them live and hope they someday will record a live set. I have a feeling they generate quite a bit of positive energy. Finally, I am not normally a fan of instrumentals and “Southern Son” has one, plus two as bonus tracks. Fetterman’s “Blues For Charlie”, his in memoriam to his father with whom he had a challenging relationship, is spectacular and set forth in a style that would make Gary Moore smile from the next world. And yes, the two bonus tracks are also enjoyable as well.

And for favorite songs? I really don’t want to go there, I would honestly struggle to single out special tracks. However since you forced me to do so, I’ll point you to “49/61”, a very clever song recounting Robert Johnson and Lucifer at the crossroads in Mississippi, to the aforementioned “Blues For Charlie” which I guarantee you will be played many times in your player, the Tom Petty flavored “Feels Like Rain”, and an outstanding slow blues tune “Living With The Blues” which will create a sweat pool in front of you deep enough in which an 8 pound bass could live comfortably. And I cannot leave you without letting you know that Fetterman and Company include one cover on this recording, their interpretation of Jimi Hendrix’s version of “All Along The Watchtower” which I assure you many Hendrix purists will not enjoy. Years ago I reviewed a great live CD from another Pennsylvanian, Tony Janflone Jr. His recording included a version of “Hey Joe” which included a saxophone. I complimented Tony on his take on the song, which I thought was brilliant. He informed me he had received numerous messages from Hendrix purists who disagreed with me. Mr. Fetterman, I enjoyed your version of “All Along the Watchtower”, and I think Mr. Hendrix would be pleased to know that so many years after his passing that people like you and Tony Janflone Jr. were still playing and interpreting his work in their own style.

I am already waiting anxiously for the next release to come from the Jeff Fetterman Band. Please visit Jeff Fetterman online at his official website at http://www.jefffetterman.com and purchase a copy of “Southern Son” at this link http://www.jefffetterman.com/store.html This CD is going to stay on my play list for a very long time and I believe it will yours as well.

The Jeff Fetterman Band is: